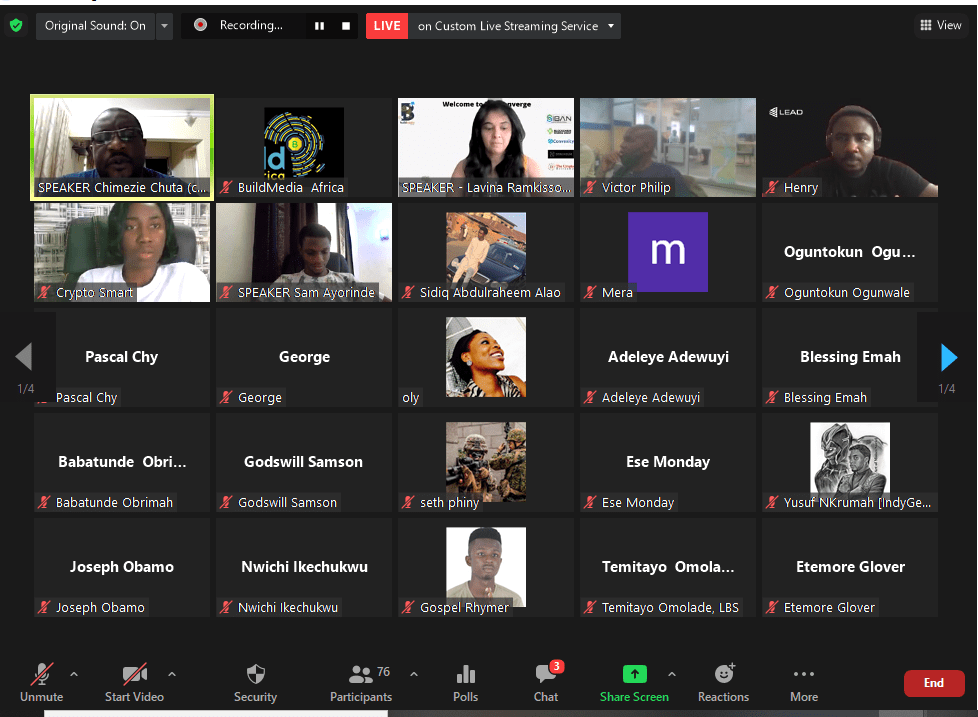 In the last story we published on The Converge II virtual event, we looked at the application of the web3 technology as discussed by Chuta Chimezie.

The massive growth in the rate of cryptocurrency transactions within Africa in can’t be overlooked with an indication of an over 55% increase in the last few months.

This is quite huge and it continues to reaffirm that the African continent is already embracing mobile money with an inclination towards the virtual currency.

This development has also come up with a lot of advantages for the teeming youth population that is tech-savvy.

In all these, the African continent is undergoing an economic revolution that has nothing to do with traditional banks, thus a discussion around the economy brings us to what stands as economic drivers.

At the moment, things like agriculture, gas, industry and services have been something that largely drives the Nigerian economy.

In this edition, we would look at the thoughts of Karla Obakpolor, the founder of QLIP NFT, Africa’s foremost NFT platform and also the founder of  Cryptosmart, a digital asset management company.

According to Karla, in explaining economic drivers, one must define the factors that define the economy whether it’s macro, micro or at the business level.

The same thing, as in marketing, where you don’t just have a product, you also have to look at the distribution channel for that product.

According to Karla, the suppliers, consumers and processes make up the economic drivers.

Relating the economic drivers to the blockchain space, Karla argued that platforms offering Defi, Gamefi and NFTs are mostly not developed by Africans.

She explained that the African companies offering these services are simply recycling imported solutions.

According to her, the inspiration for building those solutions may not be tailored to solve the economic problems in certain African countries.

“The producers of these solutions are already identified, but who are the users? now the processes has to do with the solutions that are being provided because the way the economic system is in the West, isn’t the way it is in Nigeria, and in some other parts in other countries in Africa.

Once we identify, these platforms that are built by Africans to solve problems on the continent, then one identify people who use these platforms, because a lot of these crypto projects providing these service for African consumers are not Africans- centric.

Even if we’re making money for ourselves, by using those platforms, we’re still giving money out to them. Now imagine if those platforms were made in Africa, it increases the economic system and the flow, thus becoming a win-win for both parties.”

According to her, the company serves a range of customers which include individuals, businesses and even students, however, she added that lack of education in the aforementioned three customers is a drawback on its own, stating that these customers lack the time to research about cryptocurrency.

“The Crypto industry is striving and comes up with unexpected changes that is happening very fast, thus they are not able to keep up with the trend. So the issue of education is, is one thing that’s common with everyone.

There has to be a willingness to invest in education, whether it is time or money as for paying for a course. It is not just about knowing the coin, but the foundational understanding of why a certain cryptocurrency would do well because of the blockchain on it.”

On the benefits of cryptocurrency to the Nigerian economy especially coming from the aspect of education, whereby the youths can be upskilled, Karla discussed that the tech-savvy young African population will play the role of production right at the functional level as they are the ones to do media campaign and do a lot of research work.

However, for those who have been early birds in the crypto industry, Karla explained that they will function mostly in the strategic level by helping to connect the young African population with funders of projects.

Stating further, Karla said that access should be granted to the e-Naira for defi purposes. According to her, Nigeria might not be able to go forward, if we don’t see any positive change from the regulatory bodies. Karla said that the information made available on the e-Naira isn’t the type that is expected of a CBDC.

“We were not seeing the environment for people to build, you know, defy platforms with the enaira. We’re not having those kinds of info here.”

Making an illustration in relation to the aforementioned issue, Karla stated that Cryptosmart is building a defy platform on the Algorand blockchain.

“Normally, people should be able to save the e-Naira on a certain blockchain or be able to earn with it by staking it with other currencies.

But we can’t really do that, because some of the talks that we’ve had with certain bank managers, business managers, the CBN, is quite stringent with it.

Not just anybody can have access. And to get access, there are things you need to do, this kind of process stifles growth in that direction because at the end of the day, all due would still make In the US dollar more powerful.

So the actual development would be the central government’s, giving FinTech companies license or approval to use the e-Naira for crypto-related activities, because it will boost its influence against the dollar”

Further explaining, Karla said that one of the reasons, the Naira is falling against the Dollars is because the US currency is competing on multiple platforms as compared to the Naira which competes on just one platform as a means of exchange.

Karla noted that if the Nigerian regulatory body can enable fintech companies work with the e-Naira, then the Naira would favorably compete with major world currencies.

How Web3bridge is Closing the Web3 Gap for African Developers

NFTs and the Future of Capital Raising in Africa